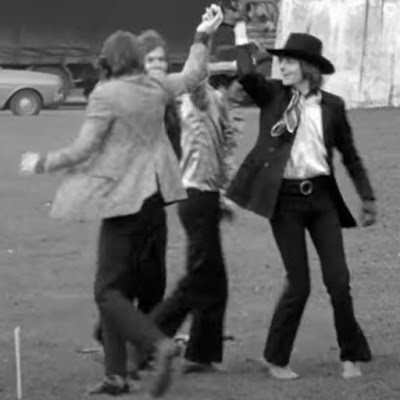 And so, May 2020 comes to an end. CMLE Play was set up to share some joy in what was a difficult month. I certainly enjoyed doing the blog - and I hope you enjoyed it too.

Some of my personal discoveries in curating the blog were Magpie Lane, The Hindman Settlement School and the classic Lomax film about Padstow. I was also pleasantly reminded about Malicorne by Tony Gillam and introduced to a couple of classical takes on May songs by Stuart Raistrick and Ariane Klauer.

We had some straight May or May-related traditional songs from Steve Fry, Brian Hunt, William Duddy, Phil Harley and Jackie Lyness. We had folk-rocked songs (sorry, that was me) and we had newly completed songs from Vic Gammon, Ant Wilson, Phil Howie and Penny Grennan.

May is also the month for Morris - and I don't mean Maurice the mouse who appeared briefly in my video. There were Morris contributions from many of the above-named, plus a couple of tunes from Doug Watt. Great to hear.

There was some tasty May-related mountain dulcimer sneaking in too - me again, Tony, William, Ariane, Sam Gleaves, Steve Smith and Steven K.Smith.

Over the month we got the chance to listen to a lot of great songs and tunes and there was some canny craic flying about in the facebook group. Some of my highlights, in no particular order, were:


Thanks everyone for taking part in our free games for May. I hope to see you again soon. Let's leave this blog with Pink Floyd, after all it was their song the blog was named after........ 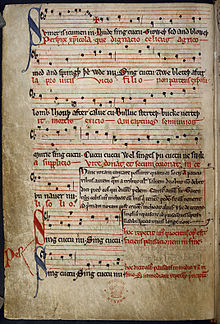 A song from the 13th century written in the Wessex dialect of Middle English, Summer Is Icumen In is a round (or rota) also known as the Summer Canon or the Cuckoo Song. It is the earliest known musical composition written in 6-part polyphony and the manuscript in which it was preserved was copied between 1261 and 1264.

It is also known as the Reading Rota as the manuscript was found at Reading Abbey, though it probably was not drafted there. As is usual with these cultural artefacts (for example the Lindisfarne Gospels) it is now to be found at the British Library, which I believe is in London.

Anyroadup, this is a great song to bring our May series almost to a conclusion. Let's welcome in the summer with Jackie Lyness:


Information on the song sourced from Wikipedia
Posted by redmando at 1:00 AM 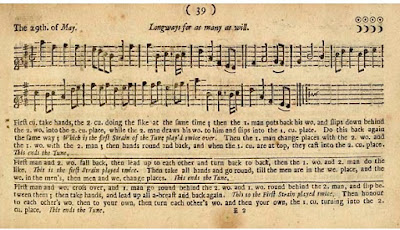 People will recognise the tune as related to the Hymn ‘All Things Bright and Beautiful’. This adaptation was made by the Victorian hymn composer W H Monk (he of ‘Abide with Me’ and music editor of Hymns Ancient and Modern). The words are from Mrs Cecil Alexander's Hymns for Little Children (1848) - a highly conservative work that tried to teach children to behave themselves and put up with the world as it is:

The rich man in his castle / The poor man at his gate / God made them high or lowly / And ordered their estate.

She was the daughter of a land agent in Ireland and married a man who became Bishop of Derry, later Archbishop of Armagh. She also wrote the words of ‘Once in Royal David’s City’ and other well-know pieces.

The original dance tune is obviously named after ‘Restoration Day’, (aka ‘Oak Apple Day’) the day Charles II (he of 12 illegitimate children and counting) was restored to the English throne in 1660. Sad - I think it would have been better if we had stayed a republic, but it was not to be. Nice tune though - I don’t think there is a tune called ‘The 30th of January’ - I should write it.

’The New May Moon’ I first came across in the manuscript book of the Welch family of Bosham in Sussex, which dates from  around 1800, Anne Loughran and I included it as no 77 in A Sussex Tune Book (1982). In the Welch manuscript it is simply called ’The New Moon’ but the tune crops up in other English, Scottish and Irish sources as ‘The Young May Moon’ or ‘The New May Moon’.  It has a number of other titles including ‘Johnny the Journeyman’ and ‘The Dandy-O’

The tune gets the May moon title from a song by Thomas Moore published in 1807, but Moore used an old tune. You can hear a performance of the song by, of all people, Anthony Burgess, the author of A Clockwork Orange at https://www.anthonyburgess.org/blog-posts/anthony-burgess-sings-the-young-may-moon/ .

The tune became an unofficial march of the Royal Ulster Constabulary and The Quick March of the 6th Queen Elizabeth's Own Gurkha Rifles. Strange world isn’t it? 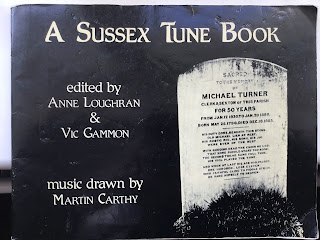 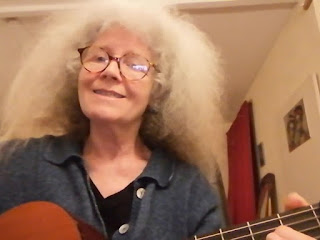 Bright Skies is my response to the May project that Steve has kindly set up. I wrote this song whilst walking under a blue sky in November in Northumberland. It was a beautiful day. The words and tune just came out together. I like it when that happens. I had a difficult time matching the tune with the chords until I discovered DADGAD tuning this month. I hope that you like it. Happy May.

If I had wings and I could fly,
I ‘d take to the sky,
I ‘d skim over the land,
And see the imprint made by man,
I’d skim over the sea,
And see those fishes swimming free.
Nice skies, bright skies
They make my spirits rise.

Some days are dark and grey
And heavily they weigh, upon me
But my heart flies
When I see a nice sky.

Bright Skies, light skies
They make me want to fly
They make me remember the blue of your eyes
I see all this in a nice sky.

Bright skies, light skies
They help our hearts to rise
And reach the pinnacle of the skies
All this in a nice sky
All this in bright sky
So beautiful it makes me want to cry
Nice skies, bright skies
In the blue of your eyes. 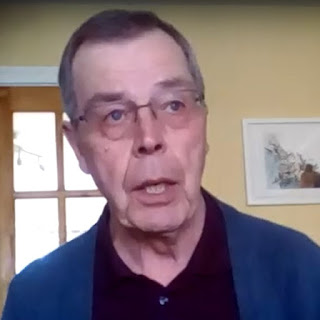 The lyrics to this were first printed as The Maypole Song in 1656 from a stage play. William Chappell then married the lyrics with the tune of Staines Morris in his Popular Music of the Olden Time, Vol. 1 (1859, pp. 125-6), saying:

"This tune is taken from the first edition of (Playford's) The Dancing Master. It is also in William Ballet's Lute Book (time of Elizabeth); and was printed as late as about 1760, in a Collection of Country Dances, by Wright.

The Maypole Song, in Actæon and Diana [Robert Cox, 2nd ed., 1656], seems so exactly fitted to the air, that, having no guide as to the one intended, I have, on conjecture, printed it with this tune".

However, Steve Fry says: "I got it from Ashley Hutching's "Morris On"!"


Come ye young men, come along,
With your music and your song.
Bring your lasses in your hands
For 'tis that which love commands.

Chorus:
Then to the maypole haste away
For 'tis now our holiday

'Tis the choice time of the year
For the violets now appear.
Now the rose receives its birth
And the pretty primrose decks the earth.

And when you well reckoned have
What kisses you your sweethearts gave,
Take them all again and more,
It will never make them poor.

When you thus have spent your time
Till the day be past its prime
To your beds repair at night
And dream there of your day's delight. 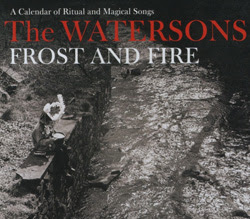 We heard Jackie Lyness singing the Helston May song Hal-An-Tow earlier in this blog series. And I have had it in my head all month - sometimes I burst out into actual song at unexpected moments.

I first caught Hal-An-Tow on the Waterson's magnificent album Frost and Fire, which was apparently Melody Maker album of the year in 1965. Now, I don't work for or receive any commission from Topic Records, but I am going to quote their description of the re-mixed album in full. I'm off to buy a copy now and urge you to do the same.

"First released in 1965, Frost and Fire, A Calendar Of Ritual and Magical Songs was the debut album from the then new group on the folk scene. Originally from Hull, two sisters, their brother and cousin had been singing family songs all their lives and as a new folk group had been attracting attention for their powerful and exciting performances.

They were taken into the studio by Bill Leader to record an album for Topic Records and what came out of the sessions was incredible. Frost and Fire was essentially a concept album, the songs following the passage of the year. It's effect was seismic, standing the folk scene on it's head and influencing not just folkies but the ever growing and eclectic rock scene as well, particularly Traffic whose magnificent "John Barleycorn Must Die" came directly from Frost and Fire.

Sympathetically and carefully re-mastered from the original master, the resulting sound on this new release of Frost and Fire is nothing short of a revelation. Belying it's years, the power and sonority of the voices hits the listener just as hard now as it did in 1965. To accompany such an incredible sonic upgrade, the packaging has been enhanced with a slipcase and an expanded booklet which has many photos of English folk traditions and is a visual treat." 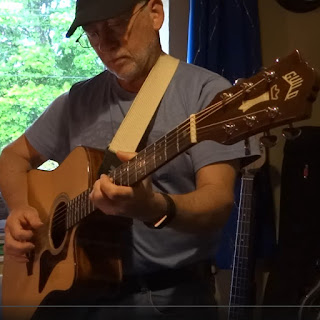 Here's a new song from my good friend, Phil Howie - hot off the press, as they used to say, to make the CMLE Play schedule. It was certainly worth the anticipation!

Let's hear what Phil has to say about "Lockdown Birds in May":

"Inspired from our daily walks during Covid-19 lockdown on Alston Moor. Started by trying to record one of my favourite bird sounds, that of the Curlew, using my mobile phone (and heard at the beginning of my song). We also noted all the many birds that could be seen and now easily heard in our garden, such as the blackbird, and in our immediate surroundings.

The peace was lovely, and often the sky was so clear and blue. However, when lockdown was eased we started to lose the tranquility with human noise competing with the birds. It started to make you wonder what you really preferred!"

Lockdown Birds in May

Our blackbird arrives each day
Perches on rails out back
A nest in the tree in May
A short flight from the deck.